YOU + BOARBETTER® - REDUCE THE RISKS IN HEAT DETECTION 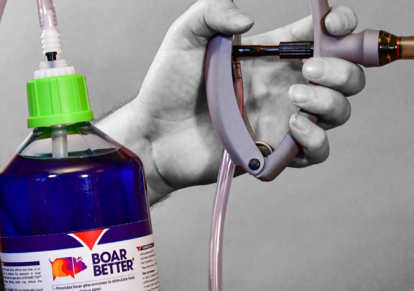 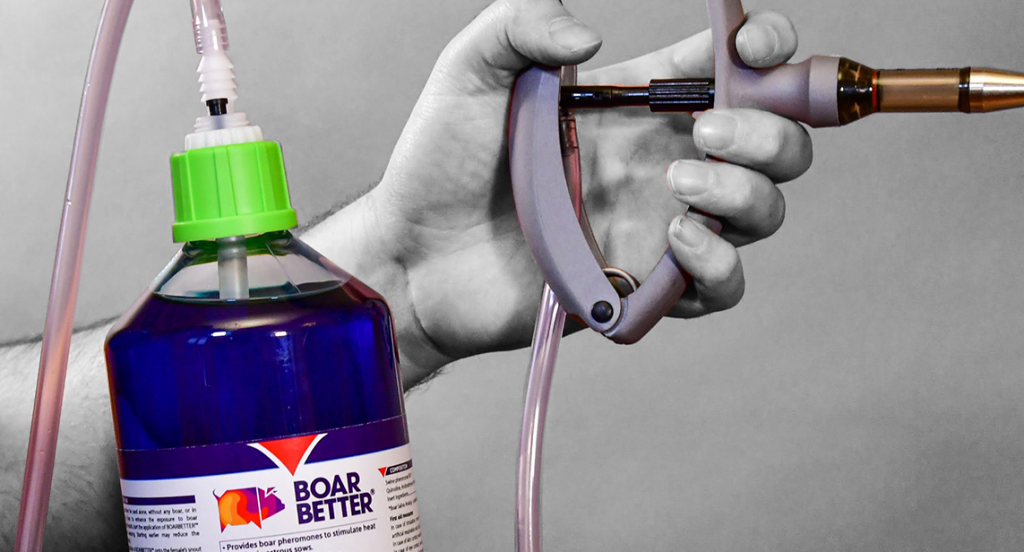 Adding new BoarBetter to your heat detection process helps reduce
the risks and improve the reproductive performance of your farm. 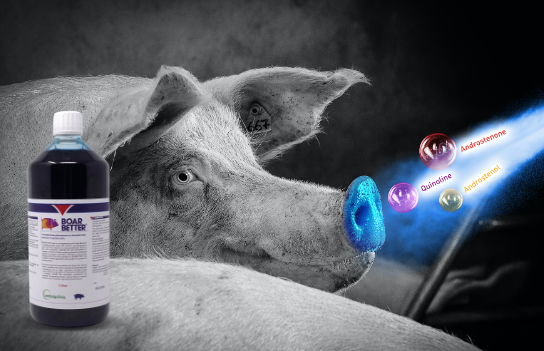 Adding BoarBetter to your heat detection process means you can be certain that the oestrus female has received all three pheromones – and the maximal sexual behaviour is then triggered. BoarBetter contains a triple boar saliva pheromone that is a combination of synthetic analogues of the three boar pheromone molecules (Androstenone, Androstenol and Quinoline).

BOARBETTER incorporates a blue dye for easy application and is ready to use in single dosage. 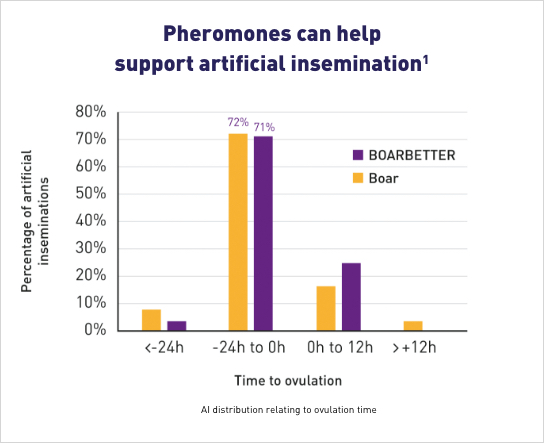 Using BoarBetter to help ensure sexual behaviour is effectively triggered not only reduces the risks of missing the onset of oestrus, but it can also help determine the best fertilisation window – resulting in:

Plus, BoarBetter can help detect the end of heat: 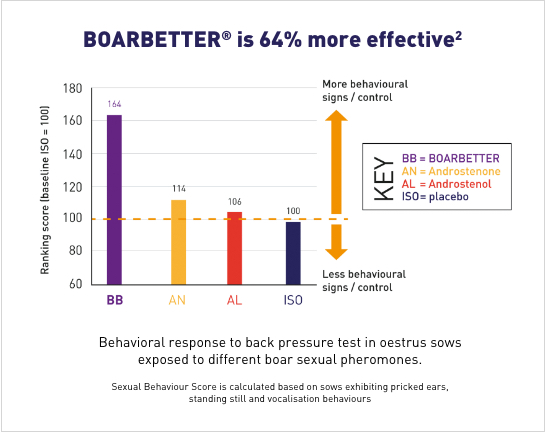 The three pheromone combination of BoarBetter has been shown trigger the maximal sexual behavioural response in oestrus females as compared to individual pheromones.

HOW BOARBETTER® CAN BENEFIT YOUR HERD

Results of a field study on a commercial farm comparing the performance of BOARBETTER plus auditory grunt and a live mature boar for heat detection.¹

4ml of BOARBETTER is sprayed directly onto the female’s snout. Using a suitable applicator spray*, spray at 20-30 cm from the snout. BOARBETTER contains a blue dye for easy application and visual confirmation. 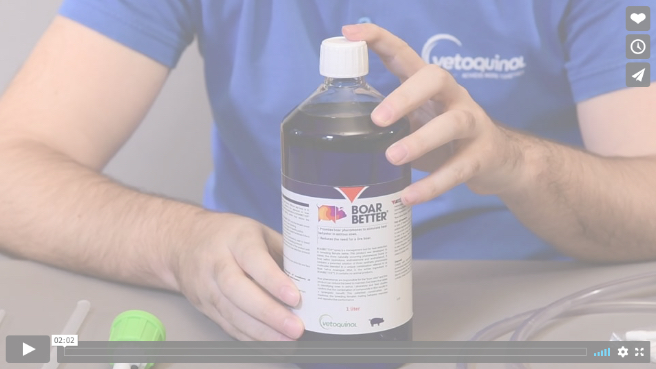 Detecting an oestrus sow / sow in heat with BOARBETTER

BoarBetter® can ensure consistent and reliable exposure to sexual pheromones in your heat detection routine. 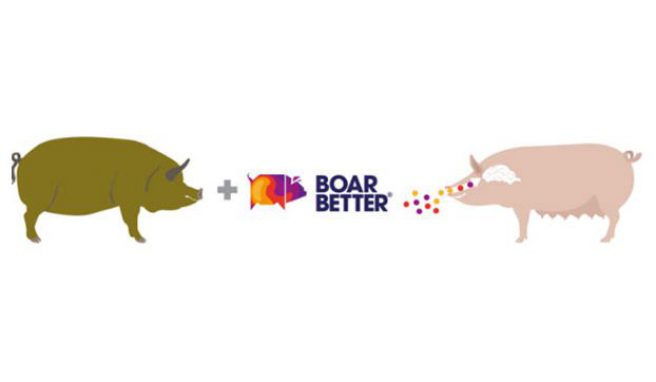 Reduce the risk of low olfactory stimulation – use the boar + BOARBETTER

BOARBETTER can help you reduce the risk and maximise heat detection: 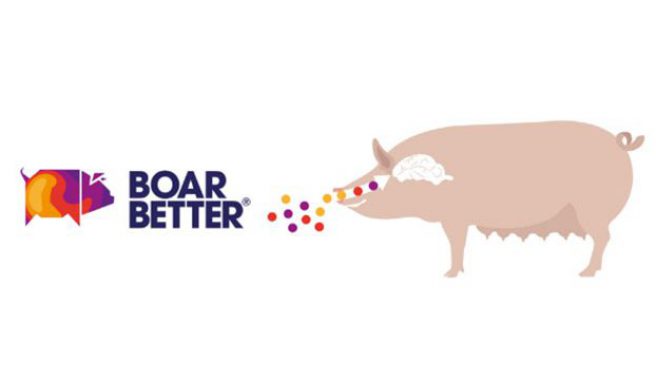 Help detect oestrus where the boar will not go

BOARBETTER can go everywhere on the farm and work beyond any biosecurity barrier.
Farm design, labour efficiency or biosecurity rules may prevent bringing boars to females – whereas farm productivity would benefit from oestrus check. Examples include:

PLEASE NOTE: The presence of a boar is recommended wherever possible 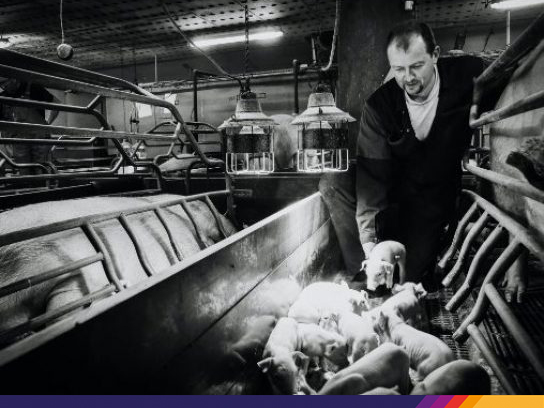 BOARBETTER is usually available through your vet. For more information on your nearest stockist, contact Vetoquinol.

“There is no doubt about the heat after applying BoarBetter. Those who are in heat are locked up.”

“BoarBetter helps sows who are not reacting to the boar, by stimulating them to express their heat behaviour – enabling you to detect heat better across the sow batch.”

“In my breeding management, I chose to use BoarBetter on all first parity after the boar has passed through. Detection is easier because the signs of heat are clearer.“

“BoarBetter’s odour is very similar to strong-smelling search boars. The sows have a higher response with Boarbetter compared with a single commercial pheromone product. The best way to implement the use of Boarbetter in the daily routine might be a puzzle.“

your browser is too old, please use Firefox, Edge or Chrome Download.

We use cookies on our website to give you the most relevant experience by remembering your preferences and repeat visits. By clicking “Accept”, you consent to the use of ALL the cookies.
Cookie settingsACCEPT
Manage consent

This website uses cookies to improve your experience while you navigate through the website. Out of these, the cookies that are categorized as necessary are stored on your browser as they are essential for the working of basic functionalities of the website. We also use third-party cookies that help us analyze and understand how you use this website. These cookies will be stored in your browser only with your consent. You also have the option to opt-out of these cookies. But opting out of some of these cookies may affect your browsing experiences.
Necessary Always Enabled

Any cookies that may not be particularly necessary for the website to function and is used specifically to collect user personal data via analytics, ads, other embedded contents are termed as non-necessary cookies. It is mandatory to procure user consent prior to running these cookies on your website.